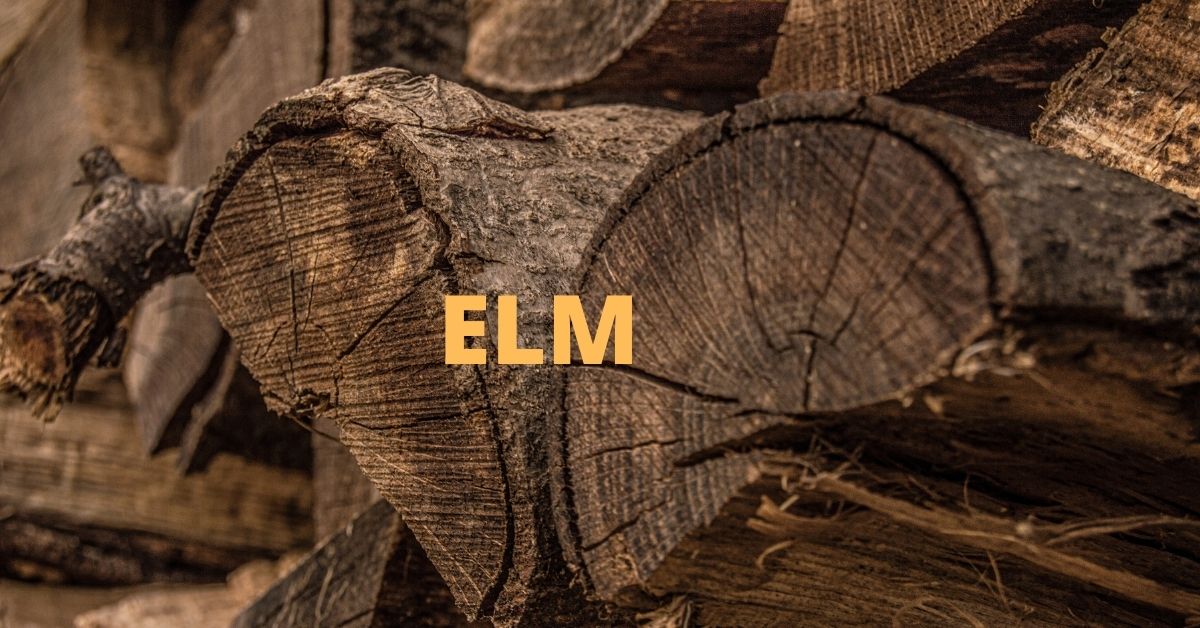 Do you want to burn Firewood for cooking while going camping or during a bonfire, or want to burn it for an indoor wood stove and wondering what firewood to choose and came across Elm firewood? The question in your mind would be, is Elm Good Firewood?

There are numerous Types of firewood in the market. Some are good, and some aren’t even worth buying. This Post will focus on Elm and also guide you on how to burn it safely.

Elm is poor Quality Firewood as it offers relatively less heat and is very difficult to cut. The average BTU Of Elmwood is 20 Million Per cord Much lower as Compared to Other Hardwoods.

However, the wood is known for excellently burning in an indoor wood stove.

There are close to 30 or 40 species of an Elm tree. The first tree was discovered in Central Asia about 20 million years ago and now can be seen commonly in Europe and North America lining the streets as an ornament.

The tree is known for its strong wood, rapid growth, and ability to resist strong winds. The wood was famous and valued for its interlocking and robust grain and the adhesion of fibers. The wood was used to make wagon wheels, chairs, and seats.

The burning capacity of the Elm firewood is deficient, and it is not the preferred choice of many people, but it is still used for small purposes, such as indoor fire and indoor cooking purposes. Elm firewood is suitable for low-temperature heat.

its British Thermal Unit (BTU)is 20 million, comparatively low to the other woods. Elm firewood is a lot of work as it is quite challenging to cut the wood, but it is relatively safer than the other woods, which attracts the people towards this tree.

How Long Does it Take Elm to Dry?

Due to its ability to absorb the scent and water from its surrounding environment, a fully Grown tree can take one or two years to dry up, and the process of cutting it up to burn starts after it completely dries up.

If you do not let the elm firewood season for its specific time, it will produce more smoke than heat, but it creates a moderate amount of heat when seasoned well and on time.

Also, keep in mind the beetles that remain in the tree before burning the wood. Keep it away from the water as it absorbs it well and decays if it gets wet.

Even with its drawbacks, the Elm firewood is still in the top ten most frequently used burned wood. The main reason for that is it is readily available in many parts of the US.

It Grows in places like roadsides where lumberjacks can easily cut them from time to time. The tree continuously gets attacked by Dutch Elm disease, causing it to die out, making it easy for laborers to collect them.

Over time, Dutch-resistant products are being made, causing the trees to grow more and more.

However, in contrast, soft Elm has large earlywood pores and is as wide as four rows in red Elm and two pores in American Elm.

American elm,Red Elm and Siberian Elm are the Most Popular to use as a Firewood. American Elm is Grown all across North America and is known as the White Elm. It is called a hardy plant because of its sturdiness and resistance to the wind.

It has lower BTUs as compared to the Red and Siberian Elm it Produces 20.0 BTUs Per cord. and is also harder to cut than others that’s why a lot of people don’t like it.

in some cases, it takes longer than one year to season if it’s dry properly than Burns Fine However, it is known for producing more coal than either of those.

Red Elm, also called invasive species due to its ability to grow at an aggressive level, is found abundantly and is therefore Preferred for burning wood.

Unlike American Elm, Red Elm is easy to split and has a higher BTU than American and Siberian Elm. It is known for Making Good Firewood also Burns well for a long time.

The reason behind its BTU is that it has a medium density. At the same time, both American and Siberian are notoriously dense.

Even though it has a suitable BTU, but it still cannot compete with Oak and Hickory trees. The overall heat capacity of Red Elm is adequate, and majorly it is long-lasting. People prefer Siberian Elm over American Elm because It is of better quality and has a high BTU, and smells nice. But when compared with Red Elm, it is almost neck and neck with it, and people tend to choose both Red Elm and Siberian Elm.

Commonly known as Chinese Elm or lacebark elm it is a mediocre wood. it takes a long time to season and is very difficult to split Chinese elm is a hardwood and Burns Hot.

Cedar Elm is used as Dual Purposes it’s considered both a shade tree and an ornamental tree. Cedar elm Grows to a  height of 50 to 70 meters.

This tree grows at a moderate rate. it also used as firewood and Produces mediocre heat output.

The BTU of Elm varies from species to species. The general BTU of all the Elm firewood is quite good, helping them rank among the middle-tiered firewood.

Following are the BTUs of some of the most popular Elm Trees.

You will go for Red Elm if you want more heat as it has the highest BTU out of all. However, the American and Siberian aren’t also bad and shouldn’t be disregarded like that.

Elm firewood is safer to burn but has an unpleasant smell that comes from the various diseases the tree has and from the beetles that reside in the corroded bark.

Another reason for the unpleasant smell is that Elm absorbs the odors from its environment, and if it is near a field of daisies, it is excellent for the tree.

However, if it is growing somewhere dirty and septic, the smells will be dreadful. Make sure to find out where the wood is from before burning it in an enclosed space.

The best thing about Elm firewood is that it is not sappy, and because of its hardwood, it has less resin and sap content. So when burning Elm firewood, you don’t have to deal with unnecessary stickiness.

As mentioned above, to burn the wood properly, complete the seasoning period, which is the most time-consuming and tends to take one year at least or sometimes can go up to two years.

It is a time investment, but if the proper seasoning time is not given to the wood as it absorbs a lot of water, the wood will not burn, or even if it did, all you will get is a bit of steam. The Elm firewood produces a moderate amount of smoke when burned, but if it is wet, it makes a ton of smoke.

It is advised to store the Elmwood on a firewood rack slightly off the ground and is in a dry and sunny place, preferably in your backyard.

The wood of the Elm is very thick and dense and is adequate for producing good heat. To split the dense wood of Elm tree, it is essential to have a good woodcutter. You can cut the edges with the help of an ax by hand, but it requires a lot of effort. 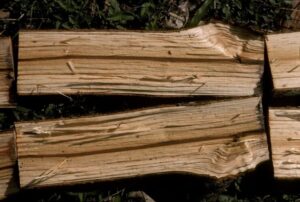 Dutch elm disease, a fungus-born disease in elm trees, is known as the top disease responsible for the catastrophic destruction of elm species, a tree of the Ulmus genus.

This disease is found to be dominant in the UK, Europe, New Zealand, and parts of North America.

The disease affected a huge number of large elm trees with only a fraction of these left on the ground and highly affecting biodiversity and the local environment.

The fungus responsible for the disease is carried by the bark beetles. The soft or loose elmwood attracts beetles as a favorable spot for laying eggs and carrying out a colony.

The female beetles dig a shaft between the outer bark and inner hardwood. This shaft provides a perfect spot to lay eggs and transmit the fungal spores.

Once fungal spores are dropped, enormous growth is observed in a very short time.

When the beetles feed on the leaf axils the spores find a way into the water and food transmitting veins known as Xylem in the tree.

If the situation persists the tree eventually dies and falls apart.

The interconnected roots also transmit the disease where beetles can move up to fifty meters via root system to other healthy trees in an attempt to colonize more trees and so the cycle continues.

Elmwood is a safe wood compared to other top-tiered lumber because it does not produce a lot of sparks. Spark can be dangerous, especially when burning wood in enclosed spaces causing safety issues when the wood starts leaping from the fireplaces and start hurting people and lighting things on fire,

so it is a safer bet to burn the elm firewood. To cut a long story short, elm firewood is used mostly for indoor purposes, and it needs a year or maybe two to season out to produce a fair amount of heat.